Coffee with the Underworld

You never know when you'll be taken to the Edge... and beyond.

In the midst of our recent move -- when the moving van had just arrived outside our apartment and I had just carried down the first box -- I got a phone call from the Embassy. Two tourists lost their passports, which had now appeared in Odessa. Would I please help by receiving them and holding them until someone can come get them? Sure. But... a series of calls ensued, and I needed to go meet the guy. Sure, no problem....

Next day, I find myself at a clandestine meeting, walking around a building so I can be observed for a tail, then sitting down with a shady character at a swanky coffee shop, waiting for a shifty third party to bring the documents. They're all there. "Thanks! Can I give you something for your trouble?" (Like, a cup of coffee...?) He smiles. "How about $200?" I back away and refuse, since I'm just doing a favor for a friend. They're disgusted, but they insist I take the documents, saying, "If they have a conscience, they'll do the right thing." Conscience, huh?

So, you just never know. Out here on The Edge, a preacher can end up getting a lecture on ethics from the Mafia! Life never ceases to amaze! 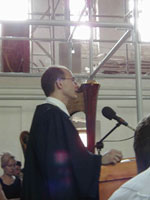